2 new versions are released today, here is the list of changes below.

This is essentially a fix for a problem with Venu models that was causing a crash after a few seconds or minutes of use. If you don't have a Venu, there is no need to update Apnea CWT to version 2.0.2.

More than a year and a half has passed since the last update of Apnea CWT but the wait was worth it: a lot of new features are available in this version.

The development took a long time mainly because of the lack of time to properly test the features due to the health restrictions that affect us all.

Change of the interface

When opening the application, …

The development of a brand new version of Apnea continues but is not yet finished and you should not be disappointed with the changes and new features. (spoiler: a "buddy" mode, I'll let you guess what it will be used for)

In the meantime, the list of compatible models is growing with the support of the following watches:

Note however that these models are …

After a long period of testing, a long-awaited feature has been implemented: the management of activities directly from the Apnea site.

By log-in in to Apnea, you have access to a view of your activities that you can filter by different criteria and sort in order to easily find information about an outing or training. 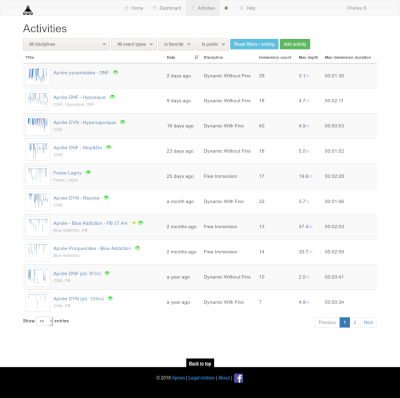 By clicking on one of the thumbnails in the table, you open the activity in floating mode ("popup") over the …

They fix some bugs and add support for new models, here are the details (valid for the 2 versions Apnea CWT and Apnea DYN):

At first glance, you may not see the difference, but it has nothing to do with the old one.

You may have noticed a link on the top right to connect to the site: from now on, you can connect to your space to manage your Apnea CWT registration keys yourself (simply by using the password recovery form) but most importantly, it will be possible to access its …

It's been a long time since I've given any news via the blog, mainly for the reason mentioned in the previous article.

I no longer do support via Facebook / Messenger, the only way to get help is via the following email address: support@apnea.me, I always make sure to respond quickly to requests.

2 new versions of Apnea are released today, it only fixes minor bugs.

On Apnea DYN, the reading of the Depth parameter was not correctly read and the immersion then started all the time at 0.5m.

In common, on Apnea DYN and Apnea CWT, the following bugs have been fixed:

The family having recently grown, I took a while to …

Garmin has recently released a new version of the firmware for Vivoactive 3: the 5.20, in the ChangeLog, we can see:

The last element hides the deactivation of the touch screen for swimming-type activities making all third-party applications completely unusable, of course, the Apnea versions are affected by this problem.

Publication of 2 new minor versions that support the following models:

If your watch is not one of these models, you do not need to update.

The english version of Apnea documentation is published in PDF format.

Thank to Ralph Maurin from Montreal for the traduction.

This is the index :

The first patch is minor and only applies to Apnea CWT

When you launch Apnea, an activity is created and will store all the information related to the activity. An activity is linked to …

The use of Facebook as a means of communication has show these limits rather quickly, the articles were not relayed to everyone and the layout is much too limited.

So, I decided to create this blog and I will try now to publish articles with each new version of Apnea detailing a little more the changes and novelties.

It is also likely that I publish articles on freedive but not directly related to Apnea.